She's kind of an idol of mine. Which speaks volumes really.

This is my new username - same journal, same random content.

Here's a pretty picture of a field of wheat: 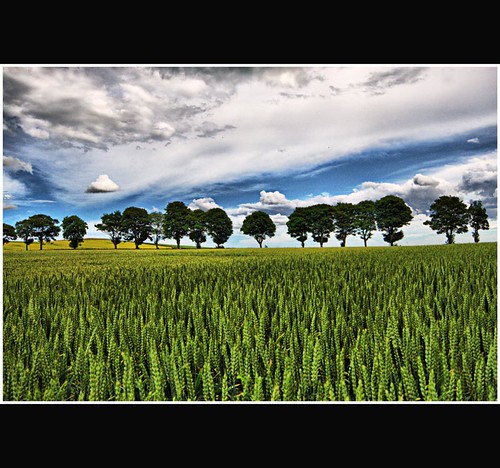 One of the 'journalists' on the left hand side of this photo had the gall to ask Bruce and Denise Morcombe if they were 'prepared for the fact that not all of the bones (of their deceased son, missing for 8 years) would be found'. Mrs Morcombes reaction was pure disgust, as expected. Nice job people. A credit to your profession...

For some reason, the assembled throng of 'journalists' remind me of kids dressed up in their mum's clothes. The one on the far right looks like a dishevelled Winona Ryder. And the one in the foreground, who appears to be bored as shit by the whole experience, looks like she's thinking something derogatory about something - perhaps if she looked in the mirror and realised she was dressed like a pre-90's secretary she'd wipe the scowl off her face somewhat.

I wonder which one said it, and how they think that's an appropriate question to ask? It's not good journalism, it's plain crass, even if the question might be on people's minds.

This here blog has been in my name for a rather long time, and while I have largely enjoyed the process, it is pretty obvious I am not posting with the regularity I once was. Not for the first time I have considered packing up shop and trying something different somewhere else. In the interim, I'll be renaming the blog and starting afresh under a pseudonym. One of the services that Livejournal still does provide is the ability to pay for a new name and for the old blog to not redirect to the new one.

Which is what I want - I have a sudden and pressing need to have a more private space than my very uncommon name will allow me to have - this blog is too easily Googled for my liking, and I find I am 1. struggling to maintain my interest in blogging lately because I am b) too conscious of who is reading and 3) sometimes subject to rude emails and comments from those who one would probably ask the question if given the opportunity why are you reading about me if you don't like me and as such I find I am d) self-censoring, which was never my intention.

There's also the fact of all that rubbish bloody spam I'm getting via the comments - which is what is leading me away from Livejournal in a big way.

So a couple of things are going to happen in the near future: I am going to rename and then eventually relocate this blog, and when it is relocated I will be closing my old sadly neglected and all-too expensive website. And then I will still be on the internet, I just will be a little harder to find. Probably not very, given I want all my content in the one place and some of it may be recognisable by the various search engines. But it will be great to be able to post journal entries and upload some of the writing I have been doing while I haven't been updating my website.

Oh sure: if you've been reading and commenting for years and such, you'll be first on my list of people who get the email saying 'here I am'. But I'd like to be Googled and my professional stuff takes precedence over this blog, which is basically just me venting, bragging, sooking and soforth. There's a place for both on the interwebs, but just not in the same domain name and under the same all too easily found name.

So basically, if you like this blog, and you want to keep reading, you'll need to let me know of your existence if I don't already - I will be sending an email to those folks I know read my manic missives, but if you're out there and I never knew you existed, please let me know sometime in the next week, 'k? And thanks for reading all this time.

Its Break Week this week in the world of academia, and I for one am exhaustipated.

Some astute eagle-eyed viewers may have noted my absence from these pages for a good month, and let me tell you, it has been a good month of busyness and business, and of making some decisions and starting some new projects and of being away and coming back, which is always nice because it means time spent with the little feller and he's such a wonderful little bloke and the absolute consistent coming-home to in my life.

He's a lovely kid, and takes a good photo:

So I got that, at least.

I have on my to-do list a bunch of backed-up blogs, which I will post forthwith as if I was never really gone. There was a vague plan - a promise - what have you, to blog consistently and regularly, but then the overloaded Term interrupted and my second half of the year is looking almost as busy as the first half.

But never fear, because I have two more commitments this month, then virtually nothing until mid November, which is always a good time to skedaddle and travel, innit? Ja.

So let's backdate this here thing, reveal a little bit of the comings and goings, and generally catch up. How have you been?

• What is your occupation? Academic. Tension-reliever in meetings (Bad puns and Jokes division). The Friend who is loyal and generous to a fault.
• What color are your socks right now? Bare feet bliss. Post pedicure too, so they feel fresh.
• What are you listening to right now? The heater, a possum on the roof, background babbling on the TV.
• Can you drive a stick shift? Yep; I get bored in an Automatic.
• Last person you spoke to on the phone? A friend.
• Do you like the person who you stole this quiz from / tagged you? This is a Googledthen-cut and pasted job. They won't even know its gone.
• How old are you today?  38. It just occurred to me the other day actually; I guess I had forgotten.
• Favorite drink? Water, mineral water, Earl Grey tea, pale ale and Bavarian beers.
• Favorite sport to watch? Erm, none really. But I do like to watch sports with friends; mostly Grand Finals and things of some importance. Its more for the social aspects.
• Pets? Just my Monty. He's more a loyal and caring friend than a pet really.
• Favorite food? Potato bake, ratatoullie, a cake someone else made, eggpant parmagianas.
• What was the last movie you watched? Gosford Park: great film and reminiscent of my recent foray into Downton Abbey, but unfortunately I couldn't hear a damn thing Emily Mortimer said.
• What’s your favorite day of the week? Any day I feel happy and good about myself. Sometimes those are the days I don't see anyone.
• How do you vent anger? Cry, whinge, ruminate, try to figure out what's wrong, tell others so I don't take it out on them.
• What was your favorite toy as a child? Lego and the backyard.
• What is your favorite season? Late summer/ Autumn / Early Spring and proper Winter with snow.
• Hugs or kisses? N/A
• Cherries or Blueberries? Blueberries. With icecream please.
• Living arrangements? Me, myself and the cat.
• When was the last time you cried? Saturday night and Sunday - some people just know how to make me feel like a real loser.
• What is on the floor of your closet? The closet floor. Shoes.
• What did you do last NIGHT? Went to a meeting of a community organisation I'm thinking of joining. Having more to do and less time to worry about people who make me feel like a loser seems like a good idea at this point.
• Favorite smells? Fresh flowers, baked bread, lavender, sandalwood, a close friends cuddle.
• What inspires you? Good friends, honesty, bravery of all kinds, loyalty and people who live their true lives.
• What are you afraid of? Dying but not afraid of being dead
• Favorite dog breed? Beagles and kelpies and labradors and puppies
• How many states have you lived in? Two.
• Favorite holiday? New York and San Francisco. Canada. Europe. The Phillipines. Want to go to India one day. And Viet Nam and Laos. And Tibet. And Nepal. And lots of places more.

How many do you have?

So recently (as in, a few days ago) I joined one of these movements: not-political, not-partisan, non-judgemental...

Non-talented, from the first go...

Hey, Elvis only ever strummed the damn thing:

And he was the King.

I won't ever be a ukelele Queen...but I can stamp my feet like a damn Princess when I get it wrong...am slowly getting it though.

Took myself with my big warm coat and hopped on a jaunty flight to Sydneyville, a little town down South. Stayed at a very clean and reasonable Y and enjoyed wandering the Park in the morning, although it was not nearly as cold as it was expected to be. The conference itself was some kind of executive-level talkfest, where I felt quite out of place in the salubrious surrounds until I performed my little paper in a pique of nervous energy, which impressed many both near and far.

Had dinner with J at our old haunt, Betty's Soup Kitchen, now sadly slowly going down the gurgler due to increasing rents and decreasing patronage. The $9 soup (Potato and Leek, free bread on the side) is heartwarmingly good and all too cheap considering the location.

Oxford Street is a busy beehive of cyclists and convenience stores, and every second shop is a bloody franchise - very different from the days of old. I didn't want to ask J where the Pop Shop went to - one can only imagine. Apparently they have a Facebook fan page...which really means diddly-squat in retailing. At least REMO is still around, although they're increasingly in Sale mode most of the time. It can only spell bad things.

Spent some time shopping, sipping and supping with my sis, caught up with the elderly relations, and generally had a very quick, low key trip to the place of my birth and home for much of my life.
Collapse